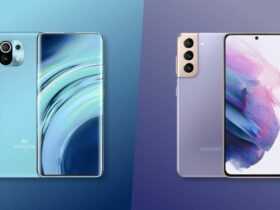 During the Developer Direct of Xbox and Bethesda, Tango Gameworks, studio known for The Evil Within and Ghostwire: Tokyo, presented by surprise Hi-Fi Rush, a project that circulated among rumors in recent weeks. The novelty is surprising because it completely escapes the well-known style of the producer and director Shinji Mikami, legendary creator of Resident Evil, presenting a cartoonish look and gameplay based on the rhythm of the title’s soundtrack, combining characteristics of games like Sunset Overdrive and Guitar Hero.

In the game, players assume the role of Chai, an aspiring rock star who had a music player fused to his heart by mistake, in an experiment by a “diabolical corporation”. A target of the company, which intends to recover the equipment because it considers the test a failure, the protagonist is pursued by hordes of robots, and must now face them with his new power: that of feeling the rhythm of all things. This skill is what drives the gameplay of Hi-Fi Rush. 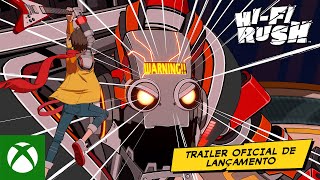 As the developers explained during the conference, the idea is not just to be a “button mashing” game, but to feel the rhythm, following the attacks according to the beat of the soundtrack. For this, players are rewarded by having bigger and more devastating combos as they hit the sequences, in the best Guitar Hero style. The inspiration in the famous rhythmic game, and in Sunset Overdrive with the cartoonish look, is quite visible.

Another interesting point is that the boss battles received special care. From the trailer, it is possible to notice that the clashes with bosses have unique mechanics and sequences, and should be different from the rest of the phases – something that should make them more attractive and striking. 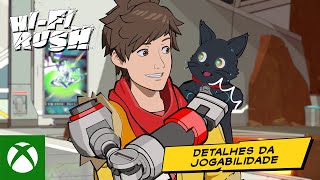 Accessibility was also a focus of Tango Gameworks: in addition to allowing players to dodge and jump at any time, visual cues and even a robot companion cat (which can be petted) help those who have more difficulty keeping up with the pace. The package closes with a series of licensed songs from bands like Nine Inch Nails and The Black Keys, although a special mode for streamers is available, exchanging the songs for original productions to avoid copyright problems.

Not only was the announcement a surprise, but so was the launch: Hi-Fi Rush is now available for Xbox Series and PC, through Steam, Microsoft Store and Epic Games Store for R$ 109, but can be played for free by Xbox subscribers Game Pass. A Deluxe Edition with additional costumes and 20,000 Gears (used to upgrade characters) will also be available, costing BRL 144. Those who choose to upgrade in the future will have to shell out BRL 39 for the Deluxe package.