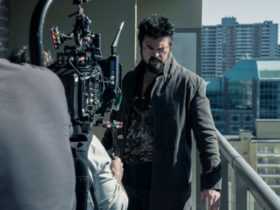 The most famous conspiracy theory about our natural satellite says that the human landing on the Moon was a hoax, but there is another even more exotic: the theory that the Moon is hollow. That’s right, supporters of the “hollow moon” believe that there is nothing inside the closest celestial body to Earth, a belief that arose from the misinterpretation of a real NASA experiment.

In 1969, the Apollo 12 mission landed on the Moon to continue exploration and scientific experiments on the lunar surface. That was the second manned mission to the satellite and the first to make a precise landing in a predetermined place.

Astronauts Pete Conrad, Richard Gordon and Alan Bean were launched on a Saturn V rocket from Cape Canaveral into space. The landing (the name given by scientists to the moon landing) took place on November 19, 1969. In total, astronauts Conrad and Bean spent about 31 hours on the moon, while Gordon remained in orbit in the command module. They brought back photographs, rocks, soil samples and parts of Surveyor 3, an unmanned probe sent to the lunar surface two years earlier.

The mission was quite peaceful, mainly because humanity had already conquered the landing on the Moon, in the Apollo 11 mission. The astronauts were relaxed and even had fun during their tasks. But one of his last acts gave rise to the craziest conspiracy theory about the Moon.

After completing the mission on the lunar surface, the pair of astronauts climbed into the landing module to return to orbit and board the service module again. Then, one last experiment would be carried out: throwing the lander back to the Moon.

The objective was to make the module collide with some violence to measure the earthquake and thus better understand the structure and composition of the Moon. The impact was equivalent to the detonation of a ton of TNT and triggered the first “moonquake” (earthquake on the Moon) caused by man.

On the lunar surface, Conrad and Bean had set up the Passive Seismic Experiment (PSE) seismometer at the landing site. When the module collided with the Moon, the equipment recorded the resulting vibrations and scientists were surprised – the moonquake was bigger and lasted much longer than they had predicted.

The problem is that, at the time, scientists used some figures of speech to describe how strange the earthquakes on the Moon were. “The moon was ringing like a bell,” said Clive R. Neal, associate professor of civil engineering and geological sciences at the University of Notre Dame.

The seismic vibrations peaked eight minutes after impact and took an hour to dissipate. Hence the comparison to a bell, but of course this does not mean that the Moon is empty inside.

Even so, conspiracy theorists misinterpreted the figure of speech used by scientists and perpetuated the hollow moon idea. Some even spread the idea that the Moon is actually an alien spacecraft in disguise. However, there is a much better scientific explanation for the lunar “bell” tolling.

Why does the moon shake so much?

The seismometers of the Passive Seismic Experiment remained active until 1977, recording other moonquakes produced by astronauts and other natural ones, produced by the constant falling of asteroids.

This means that lunar earthquakes happen quite regularly, as space rocks hit the surface there more often than on Earth, due to the absence of an atmosphere capable of burning the debris.

According to scientists, prolonged bell-like earthquakes occur on the Moon due to its composition. On Earth, where there is a lot of liquid water, rocks are wet enough to act as a “sponge”, absorbing some of the impact caused by seismic waves.

This is not the case on the Moon, where there is no liquid water and therefore impacts are not easily absorbed. As with any other type of dry object — like a bell, for example — reverberations propagate much more easily and take time for the energy of the shock to be depleted.

The Moon is geologically active

Four types of lunar moonquakes were then identified: deep moonquakes below 700 km of moonquakes; moonquakes caused by meteorites; thermal moonquakes; and shallow moonquakes, which occur from 20 to 30 km deep. Some of the latter even reach 5.5 on the Richter scale.

Deep, shallow and thermal tremors indicate that the Moon is geologically active, and may even require extra preparation for the next astronauts who go to the lunar surface – mainly because NASA’s goal is to build a base for humanity to stay there.

There are still mysteries about the Moon’s core, however, even though it is known that it is not hollow. NASA is already working on a new experiment that will try to map the lunar core and gather more data on the tremors and, who knows, discover its composition.

These surveys may still take a while to happen, but regardless of that, we can safely say that our natural satellite is not hollow. And we don’t even need to dig to prove this: the very physics of the formation and evolution of celestial bodies says that this would be impossible.