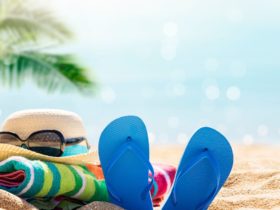 8 min Management How do you plan for a guilt-free rest? Understand the importance of vacations!

A new film by A24 with first-time director Charlotte Wells, Aftersun has been the talk of the public and critics alike. The drama stars Paul Mescal and follows a journey between Sophie (Frankie Corio) and her father, Calum, based on her memories and home recordings.

Aftersun is a feature that conquers for the drama and emotion of the relationship between father and daughter, and in the imagination of what the future awaits. Together they take a summer trip to Turkey, and many of the scenes take place in sunny settings. However, the plot manages to maintain itself due to the melancholy of the proposal.

In the film, we see father and daughter on a trip, essentially in fun and connecting moments. However, like every family relationship, there is the patriarch’s protective instinct, who tries to keep his daughter safe, but still fails to fulfill the mission.

This, perhaps, is because Sophia appears to be mature and down-to-earth for her age, which ends up making their relationship a little different and more trusting. Calum is a caring but trusting father who wants every moment with his daughter to be recorded so that, in the future, she can always remember this trip. And that’s exactly what happens.

Through these images and the construction of memories, we were able to capture each character struggling with their personal dramas. Nothing is very explicit and requires attention to perhaps capture underlying facts, and Aftersun’s interpretation can be different for each viewer and their different experiences.

We know that Calum is no longer present in his daughter’s life in the future, which could have happened for a number of reasons, and this makes the protagonist’s actions clearer, as if he knew he wouldn’t be there forever.

In addition to being able to tell a story that is understood by those who are watching, the cast of Aftersun is one of the greatest merits of the plot. From the veteran Paul Mescal, who already stood out for his work in other intense productions, such as A Filha Perdida and Normal People, to the young Frankie, we see a performance full of naturalness.

Together, the actors manage to transform the simple into something profound. Simple vacation actions, such as having dinner at a restaurant, enjoying the pool or simply contemplating the silence are done with a lot of meaning. We were mesmerized by each character’s movement, seeking in them their meanings and the reasons for Calum’s absence in Sophie’s life.

Aftersun is a film that attracts the attention of the eye for its breathtaking photography with its landscapes, interspersed with the VHS materials recorded in the 1990s and, of course, the impeccable performances. The plot is also capable of transporting the viewer to that universe, as if they could experience the feelings captured there.

The film is a virtually immersive experience created by Charlotte Wells, which manages to amuse and move even without a truly explicit message. At the end of the film, when the farewell between father and daughter takes place at the airport, anguish takes over the story precisely because it seems that it was the last time they saw each other.

Aftersun is showing in some cinemas in Brazil, but it can also be watched at Mubi.