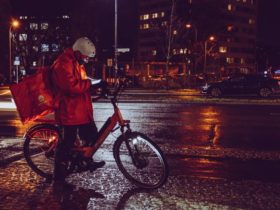 Have you ever wondered why planets are round? If so, know that the answer lies in gravity, which exerts its force from the center to the outside of the planets, molding them into a spherical shape.

Consider the Solar System: Its eight official planets have different sizes, distances from the Sun and compositions, but all were born from a single origin.

When the Solar System was forming, gravity pulled billions of particles of dust and gas together and grouped them into structures that gradually grew. There, the planets that form our neighborhood were born. The force of the collision of these little pieces of matter caused the “baby” worlds to become hot and molten inside, and later, they began to take on a spherical shape.

But we explain all this further in the lines below!

As we mentioned above, the force of gravity is the “culprit” for the spherical shape of the planets. It is a force generated by everything that has mass, and it always attracts matter in all directions. When this matter is grouped together, it gives rise to a form which also holds in all directions.

When planets are forming, they are made of extremely hot, liquid material. Since gravity always pulls matter toward the center of mass, it “forces” the matter that forms the planet to clump together equally in all directions. Behold, then, a sphere appears.

Then, as the new worlds cool, they keep their shapes — like you see with planets in the Solar System, for example. Note, however, that this does not mean that the planets are perfect spheres, as some are more and some are less round.

Is the Earth round?

You will hardly find anything in nature that is a mathematically perfect sphere, and this also applies to the Earth, which is geoid in shape.

This means that our planet is slightly flattened at the poles and has a kind of bulge at the equator, caused by rotational motion.

When an object rotates, what’s on the outside tends to move faster than what’s on the inside to keep up with the motion. In the case of planets, gravity holds the outermost matter together, but during rotation, this matter tries to “escape” due to the centrifugal force. As mass from the equator is pushed outward, this planetary region becomes more bulging.

This is why we say that the shape of the Earth is “geoid” — that is, our planet is spherical, but has various deformations and subtle differences in gravity in its structure. On Earth, these variations translate into 0.3% more thickness at the equator, while on Saturn, this number reaches 10.7%.